Three women. About slavery and freedom.
With Ellen-Rose Kambel (researcher), Valika Smeulders (heritage expert) and Marian Markelo (winti priestess) in the leading role, this documentary is a cinematic plea for an avowed recognition of slavery in the Netherlands. The moment when researcher Ellen-Rose Kambel came face to face with a sharp picture of the slave owner of her ancestors, will always stay in her mind. It forms the starting point of a feverish search for her family history. Her discoveries about the prominent legacy of the man on the picture in the South-Holland village of Sassenheim, stand in stark contrast to the deprived identity of her ancestors. She realizes that the enslaved people are mostly deprived from their biographical story. Kambel feels the urge to get closer to the lives of her enslaved ancestors. In the film, this leads to unprecedented encounters with descendants of slave owners and ultimately to public events of connection in Sassenheim, where a new memorial is erected.  During her walks in the historic city center of The Hague, Valika Smeulders regularly makes new discoveries about personal stories that took place behind these stately façades. The cityscape is closely linked to the centuries-long trans-Atlantic slavetrade and slavery. Those centuries have also left behind a spiritual legacy that becomes visible in the prayers, rituals and songs, which Marian Markelo shares with us. The winti is a religion that survived for hundreds of years and is alive and kicking in Surinam, despite a legal ban in colonial times. The documentary is an expression of a worldwide movement, where black people and people of color take pride and strenght in their history. 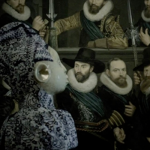 PreviousAmsterdam, Traces of Sugar
next

NextPoetry is an Island, Derek Walcott